Breathtaking scenery and an epic trail network have cemented Queenstown’s reputation as one of the world’s best mountain biking destinations. A whole lot of easy trails make it a dream for novice riders, but it’s the intermediate and advanced rides where the thrill-factor really cranks up.

Staff at Queenstown’s friendly bike shops will happily advise on the best ride for you. They also offer high-spec hire bikes, updates on track conditions, and can hook you up with shuttle transport to reach remote trails or get a lift up hill so you can maximise the fun on the way back down. You can also join the Queenstown Mountain Bike Club via their free-to-download QMTBC App to access local discounts, trail status, and bike-related events and news. Ready for lift off? Read on.

This awesome downhill riding comes courtesy of the Queenstown Mountain Bike Club and Skyline gondola, which transports riders and bikes 450m high up above Queenstown from where an array of trails swoops through the forested hills. Some of the 30 trails are the steepest and gnarliest in New Zealand.

Highlights include the old-school roots, rocks and flow of Single Track Sandwich; the rock-fest that is Slippery Ninja; and the extreme freeride terrain of World Cup. The cheekily named Huck Yeah! features a series of sensational true-table top jumps, perfect for honing big air skills.

Named after a rather manly geological feature, Rude Rock is over 3km of single track masterfully sculpted into a tussocky mountainside. Eye-popping scenery and exhilarating riding have made it one of the country’s must-do trails, with fantastic footage like this only increasing its popularity.

Located around 15km from Queenstown near the Coronet Peak ski area, Rude Rock trail is only revealed after spring snowmelt. Once maintenance crews have worked their magic, the track dips and swoops in a perfect balance of fall and flow. Skilled riders can hit the track at full tilt, although some exposed, steep sections and rocky drops will keep them on their toes. Rude Rock is a popular track to shuttle with your mates and is hard to beat on a warm summer evening!

Coronet Peak opens for the summer season which runs from the start of December until the end of March.  Suitable for intermediate-expert riders, the Coronet XC trail is rated an intermediate grade 3, while the Coronet DH trail is for the more experienced rated at expert grade 5. A good range of passes are available with full Day, Sunset or Season passes on offer and discounts for NZSki 3 Peak Winter Season Pass holders.

Around the half way mark on Coronet Peak is Slip Saddle Track, a seriously steep descent with rocks and ruts aplenty, which winds its way all the way to Arrowtown via Bush Creek, or can be linked to the Coronet Face Water Race trail, which pops riders back out on the Coronet Road at the bottom of Rude Rock. This fun flowy traverse was built by the Queenstown Trails Trust.

Skippers Canyon serves up a heady cocktail of challenging trails. Highlights include the purpose-built Pack, Track & Sack,a tight and technical but flowy single-track. It links Rude Rock with the tricky Skippers Pack Track, cut in by goldminers more than 150 years ago and winding for 6km down a tussock covered gully strewn with oddball rock formations.

Cardrona Alpine Resort crank up two of its chairlifts in summer, giving access to mountain terrain and elevation normally reserved for heli-bikers and masochistic, uphill specialists. Among the expertly designed and constructed trails are DTL – tight, technical, and super-fast if the right lines are nailed; and Dirtstar Downhill – another black-diamond favourite with all the techy trickiness you’d expect on a trail built for the national champs. 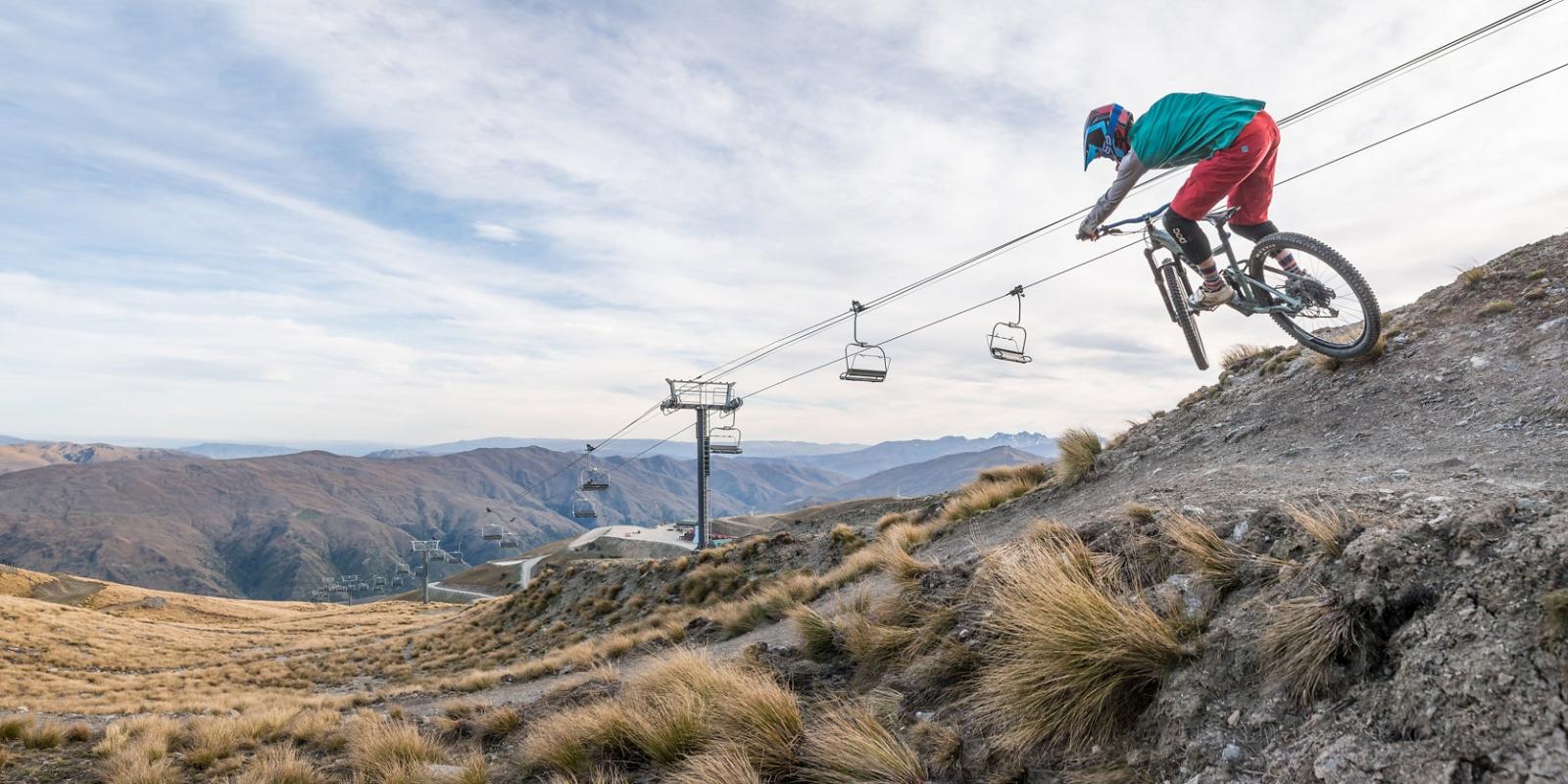 Bucking the trend for purpose-built trails with sculpted berms and super-smooth lines are plenty of old-school cross-country options for diehard traditionalists. One of the region’s best is the Moonlight Track that starts at Arthur’s Point and follows a rough ‘n’ tough trail in the backcountry behind Queenstown, finishing at pretty Moke Lake. With plenty of natural obstacles, narrow sections and drop offs, good skills and fitness are required.

Some of the most exciting new trails are popping up around Ben Lomond, thanks to the industrious Queenstown Mountain Bike Club. Salmon Run kicks off with a riotous descent on a loamy track through pine forest clinging to precipitous terrain, with steep, tight switchbacks and plenty of nerve-jangling exposed sections. Lower down in native forest are roots and rocks galore that will test even the most techy riders in the wet. Approach with caution!

Salmon Run can be reached by riding up Beeched As, a dreamy piece of uphill single track starting near the top of the Skyline gondola. Salmon Run finishes close to the Wynyard Jump Park; an awesome freestyle park featuring progression jump lines for all riders - from the newly upgraded Mini Dream to the epic 'experts only' Dream Track. The huge jumps here will test the mettle of some of the best freestyle riders. From there, the classic flow and technical challenge of the Wynyard Express DH trail will lead you all the way to lake level.

Just 5 minutes’ ride from central Queenstown, this legendary jump park is a sculptural masterpiece with dozens of jumps and berms squeezed into a wedge-shaped space around the size of a footie field. Its tight lines are best suited to BMX and slope-style riders but there’s something for everyone, including crazy folk capable of 20-metre backflips. Open all summer, it’s a great place to just hang out and watch the action.

The rugged ranges around Queenstown are riddled with farm roads, old pack tracks and other historic byways, custom-made for heli-biking. With some start points hovering around 2000m above sea level, there are plenty of opportunities for epic descents. Highlights include a double-descent down from The Remarkables involving two heli rides and almost 3000m of downhill; and Advance Peak, a sweet piece of downhill along an old gold miners’ track to Macetown followed by a riverside ride to Arrowtown.