June to August
Temperatures between -2°C and 8°C

Nestled alongside the pristine waters of Lake Wakatipu and surrounded by majestic, snowcapped mountains, Queenstown is the perfect winter holiday destination.

Whether you have an appetite for adventure, mountains and fresh air or are more at home enjoying a delicious meal and fine wine next to a roaring fire, get away from the everyday and escape to Queenstown.

The cosmopolitan town has a welcoming, vibrant energy that resonates across the resort to make Queenstown a unique holiday destination—and at no time is this more obvious than in winter, when skiers and boarders, or those just curious about snow, gather here to lap up the fun.

Big enough to offer a wide range of accommodation, activities, four ski areas, events, eateries and bars—yet small enough to make you feel like you belong.

Every year from early June onwards, the region transforms into a winter wonderland, attracting snow sports enthusiasts from around the world with its incredible lake and alpine scenery, crisp blue-sky days, easy access to some of New Zealand's finest ski and snowboard terrain and a vibrant après ski scene.

The region’s four ski areas, all within a handy 20 to 90-minute drive of Queenstown, open from early June and offer a range of terrain for all levels whether you’re keen to conquer the basics, enjoy groomed runs, tackle off-piste, throw down some freestyle tricks or experience the thrill of night skiing. With the first snowfalls, you can feel the buzz in town as skiers and snowboarders gear up for a season of fun. 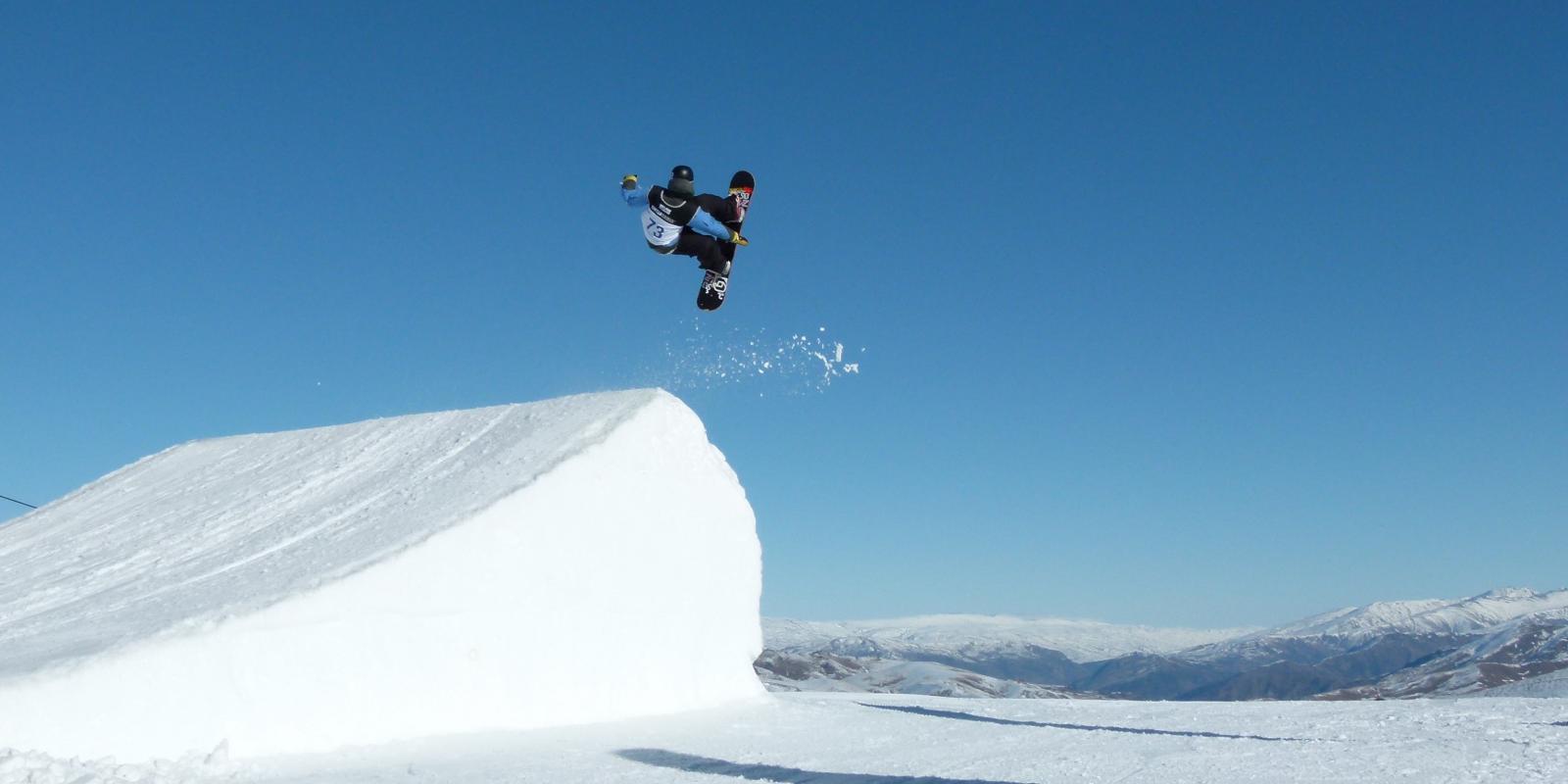 Snowboarder competing at the Winter Games

Snowboarder competing at the Winter Games

Visit Queenstown at the start of the season and experience the electric atmosphere of the town’s annual Real Journeys Queenstown Winter Festival 18-21 June 2020. Winter Festival has grown into the Southern Hemisphere’s biggest winter celebration and is a true showcase of Queenstown's unique culture and community, with fireworks, entertainment, live music, comedy, loads of family fun, and plenty of mountain mayhem, and loved by locals and visitors alike.

However Winter Festival is just the start when it comes to Queenstown’s winter event calendar – there’s loads to do both on and off mountain throughout the season!

The NZ Mountain film festival is held in July in Queenstown and is a collection of the world's best adventure films and speakers with amazing atmosphere and inspiring films. If the film fest whets your appetite for adventure racing, Queenstown’s famous Peak to Peak is held mid-August. This is the South Island’s biggest winter multisport event and attracts competitors from around New Zealand.

If the thrill of mountain climbing is what you are after The Remarkables Ice & Mixed Festival in 13 - 16 August 2020 brings together winter alpine climbers from around New Zealand and overseas to advance and promote modern mixed and ice climbing.

Later in the season (28 August - 6 September 2019) Winter Pride adds its own glitz and glamour when hundreds of revellers come from around the world to Queenstown for the Southern Hemisphere's biggest gay alpine celebration.

Just before the first buds of spring start to arrive, but still very wintery, the Winter Games NZ attracts world class athletes in late August to compete for glory in freestyle skiing, snowboarding, alpine skiing and cross-country skiing. The sporting action is complemented by a festival programme, after all snow and partying go hand in hand together. The Games run 21 August - 5th September in 2020.

Winter in Queenstown is just as much about skiing and snowboarding as it is about après ski. The compact and vibrant town centre comes alive after dark. 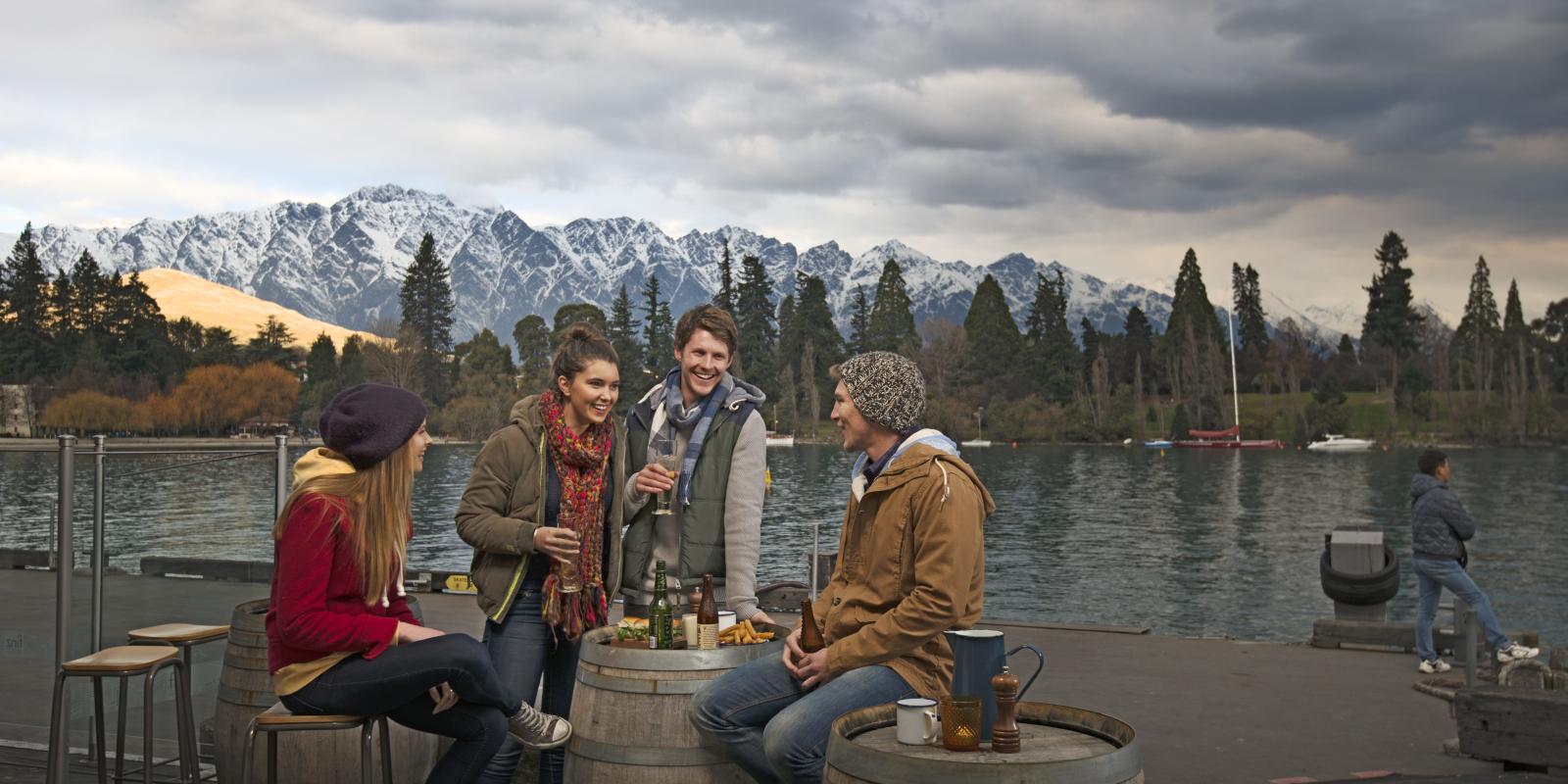 Queenstown is famous for its high-octane thrills so if you’re looking for an adrenaline rush or want to push your boundaries, there’s activities like bungy jumping, jet boating, skydiving, zip lining, paragliding, quad biking, supercar or four-wheel-driving—all guaranteed to get your blood pumping no matter the season!

For the ultimate in relaxation, especially after a day on the slopes, enjoy some ‘me time’ at one of Queenstown’s luxury day spas.  A full range of treatments are on offer and it’s the perfect way to revitalize mind, body and soul. Or, there are many ways to stretch and recover those tested legs, from languid yoga to Pilates, or even a multi-day retreat designed to help you reconnect with yourself.

Winter in Queenstown is just as much about skiing and snowboarding as it is about the après ski. The compact and vibrant town centre comes alive after dark with options for all styles and budgets. When it comes to eating out, Queenstown’s innovative and award-winning cafés and restaurants offer cuisine to suit every palate.  Along with nearby Arrowtown, Queenstown is home to more than 150 eateries ranging from fine dining to fun dining.  Stylish bars, sophisticated clubs, Kiwi pubs and late night hot spots also make Queenstown’s après ski atmosphere second to none.

For fun well beyond the mountains, Queenstown’s seven golf courses and renowned wineries are just a short drive away. Central Otago produces some of the best Pinot Noir in the world thanks to the region’s combination of shale soil and sharply defined seasons. And with around 200 vineyards within 1½ hours’ drive of Queenstown, wine tours are a great way to explore the area.

Make the Southern Alps your playground this winter, Queenstown offers plenty to explore on and off the mountain.